Why does the public school community fear involved parents? Because truth shines the light on what is really happening. The real issue is "are low income students being discriminated against when it comes to a quality public education"? Are they being held on an economic plantation?

“Whoever controls the education of our children controls our future”–Wilma Mankiller, former Principal Chief of the Cherokee Nation

There was a rally of more than 18,000 parents and children marching across the Brooklyn Bridge the other day. Why were they so enthused and inspiring?  Was it just another field trip?  No.  They were fighting for their children’s opportunity to get a quality education in the public charter schools.  Can you believe that? Parents actually having to fight to keep their charter schools open.  Who would be the Grinch in all of this?  Mayor Bill de Blasio who has stated that he will shut down the charter school system in NYC.  You see, he owes it to the teachers union that got him elected.  This is all about power. 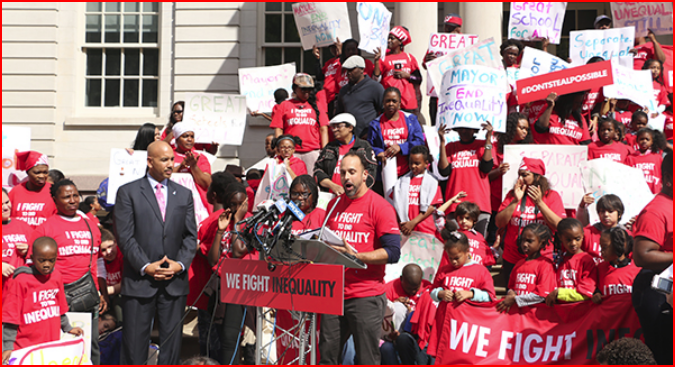 These parents were outraged.  These were not middle class, upper class, white parents.  They were low income, minority parents who knew that the best way for their children to reach the American Dream was through a quality education.   These parents could not afford private schools.  They were relegated to the public schools.  But they wanted the best public schools for their kids.  Just like parents in Anchorage.  Trouble is, in Anchorage it boils down to who you know, which schools are the best, and can you transport your child to the better schools.  Oh, one important thing-you gotta win the lottery!

Say you are a single, working parent and want your child to attend a public charter school and you live in Mt. View or Fairview.  And you win the lottery!  Big problem: you cannot possibly get your child to Aquarian Charter School which is all the way across town.  If you think the school district will provide transportation for your child, think again.  Matter of fact, the Anchorage School Board actually voted against providing transportation to allow a student to get out of a failing school so the student could attend a successful public school!  And, better yet, it cost the District absolutely nothing.  You ask, “Why would the ASD vote to deny a child the opportunity to succeed?”.  If you can answer that, then you probably can solve the riddle of how many angels can dance on the head of a pin.  Remember, you’re just a parent.  These public school officials know what’s best for your child.

Look at these comments from NYC parents who want the best for their children:

“For Louise Julissa, it was gratitude that her 9-year-old daughter was able to escape a public school with too many bullies to assume a spot at Success Academy Harlem 1.
For Adrian Roberts, it was the joy he and his wife felt, being able to give up their son’s coveted spot in their neighborhood public school’s gifted and talented program because there was a nearby charter school they thought was stronger.
For Shadae Reid, living in a homeless shelter, it was the relief of learning the news that she didn’t have to send her son to the public school on Tenth Avenue whose test scores were just not good enough.
“It’s one of the greatest schools,” said Reid, who instead enrolled her first-grader at Success Academy Hell’s Kitchen. “He can actually read. He can spell. He can do math…I want that for all the kids.” “

Can you believe it? Shadae Reid is really proud that her son can “actually read, spell and do math”?  And the best part-she wants that for all the kids! Who can argue with that?

I attended a meeting of charter school parents awhile ago and asked them to support the effort to expand charter schools in Anchorage.  This charter school expansion could only be done if the State allowed more “authorizers”-those groups that could actually start charter schools.  Trouble is, this would infringe on the control of the school district and be competition for the dollars it receives.  You see, every student has a dollar figure above their head.  Some more, some less.  To my surprise, these parents did not want to support more charter school authorizers because they did not want to impact their charter schools and their kids.  Were these parents self-serving or were they just intimidated by the school district?  Maybe a little of both.  It was difficult to hear their response.  I actually felt sorry for them and their kids.  They were not “fighting to end inequality” for sure.

Here is a Youtube of strong parents who want the best for all children:

It’s time for parents to learn how poorly their neighborhood schools are doing and what they can do about it.  This is about their children’s futures.  Today in the Anchorage School District, it appears that we have socio-economic segregation.  And this segregation leads to the prison pipeline, homelessness, drug abuse, and many other social ills.  Face it, our public education system has caused much of the poverty in our nation because it has failed to educate our children and stolen their futures.  It is nothing less. And that system needs to be held responsible.  So, let’s get with it and demand that public education provide quality teachers to every student, not just those in wealthier neighborhoods.  The time has come for the public schools to be held accountable for the poor results it gets-and now!

Let’s tell all the Grinches like NYC Mayor de Blasio that we are taking our power back and get out of WhoVille!

Read the entire article on these great NYC parents: https://bit.ly/1LpSaDW